An open invitation to share comments and captions on our gallery photos . . .

The Woodsboro Historical Society, Inc. is a 501(c)(3) non-profit organization, whose objective is to promote the study of the history of Woodsboro and to collect and conserve local artifacts and memorabilia of historical importance.

Other goals of the Society include acquiring, restoring and preserving monuments and structures in the area deemed to be of historic importance to Woodsboro, Maryland. Membership is open to anyone who is interested in the history of the Woodsboro area.

(To access the East Side parking lot entrance from Woodsboro Rd/550, travel past the first park entrance located across from the Woodsboro Industrial Park, and after the Israel Creek bridge, turn at the Woodsboro Park East Side sign. The walk-in registration table is directly ahead at Pavilion # 4)

Here are the RACE RESULTS.

Check out our unique collection of rare photographs that capture Woodsboro’s rich history throughout the years. Contributions welcome!

(9/2013) Four hundred years ago, land known today as Woodsboro, served as primitive hunting and fishing grounds for the Susquehanna Indians. Established in 1786, Woodsboro was laid out composed forty acres of land Colonel Woods received after serving in the Revolutionary War. In the early days, Woodsboro emerged in size with limekilns, quarries, blacksmiths, and commercial fishing ponds. As Woodsboro grew, homes were built to shelter German immigrants arriving from the ports of Philadelphia and Annapolis. Most of the Woodsboro settlers came from German parentage, bringing invaluable craftsmanship skills to build more homes. During the Civil War, Confederate troops led by General Jeb Stuart’s Cavalry, marched through Woodsboro. 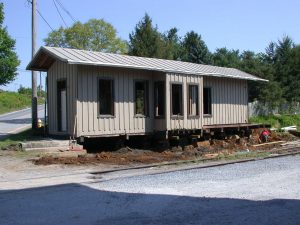